Kevin Zdrill’s latest book, The Ukrainian In Me, takes a light-hearted yet honest and heartfelt look at the insecurities, concerns, and utterly hilarious family and social life of an unemployed 30-year-old woman of Ukrainian descent, whose marriage of “nine months, a day and a morning” ended in divorce, leaving her living in her parents’ basement. But that’s just the start of things. The plot and subplots riddled with clever catch-you-by-surprise, laugh-out-loud humor all mesh together into one fun yet intelligent book.

So we asked this prolific author – just how did this book happen?

I do have Ukrainian heritage on one side of my family. As a result, I’ve experienced a unique and entertaining childhood that hasn’t stopped making me laugh to this day. I’ve grown up in a city with neighborhoods rich with Ukrainian heritages and traditions and it’s been a privilege for me to experience the wonderful culture.

I’ve come to recognize unique dynamics within a traditional Ukrainian family that got me thinking how rich a family could be as the centre of my book for the sparks to fly. Baba is truly the heartbeat and authoritative voice of reason for Ukrainians. She is the backbone, the focal point who hosts all the special event dinners, where everyone goes to get advice or gets advice whether they want it or not. She’s the feisty, less than five-foot-tall ball of fire that you fear when you mess up and collapse in her arms when in distress. And when it comes to traditions, Baba is there to pass those traditions down the generations such as crafting Easter eggs, baking and making delicious foods such as pierogies, cabbage rolls and headcheese. (By the way, those who have eaten headcheese either love it or run from it, but it’s a fascinating food with a texture and appearance that defies anything else like it!)

It’s usually very hard for a man to write from a woman’s perspective, yet you do it so brilliantly in this book. How did you get inside a divorced-and-looking woman’s head so well?

Thank you! The immediate challenge for me was the unknown – if I was successful or 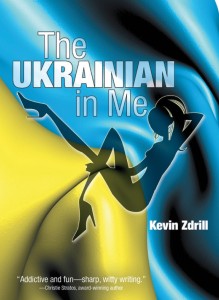 missed the mark entirely while writing from a female perspective. Essentially, the best I could do was use my own perspective and interpretation of what some of the challenges could be for a female surrounding dating, divorce, self-image and social barriers. My hopes were to identify these areas with my lead character, Larissa, and provide her with a wry, self-depreciating sense of humor, adventurous to a fault but determined to make changes in her life.

I felt writing from a female’s perspective and one who possesses a Ukrainian heritage provided me an opportunity to showcase the loyalty dilemma facing Larissa. On one hand, as a female, she is pressured to fulfill the expectations of her baba to learn customs and cooking yet is caught in a generation transitioning away from being a stay-at-home wife to gaining a career and being independent. Suddenly finding herself divorced, Larissa’s guilt of failing to please her baba collides with her own failed goals of being a wife, leaving her to question everything in her life. She equates her own fears of failure as a female as a family curse that she has no control over.

It’s always a risk whenever an author takes a stance on his impression of a character, whether it is female or male. Sometimes the voice can be captured bang on or totally fall flat. But you have to try. That’s the whole point of writing. As an author, it’s all about risk-taking and pushing the boundaries of comfort. My belief is that any writing done with passion for the character should ensure some degree of success in catching it right.

Your main character, Larissa, writes a blog post at the start of most chapters, where we’re given a glimpse into her thoughts on many different social, personal and, sometimes, political subjects. Are these posts a clever way of offering commentary about these various topics? Was there another goal in having blog posts kick off most chapters?

There were several intentions for the blogs.

As the reader, we are inside the mind of Larissa with the blogs. We are experiencing her unguarded thoughts as she races from moments of panic to despair, describing the plight of various family members to painful memories of her past growing up as an only female child. The blogs become Larissa’s cathartic release of anxious energy in order to come to terms with re-evaluating her life at age thirty as a divorced woman having to reside back at home with her parents. The blogs provide an opportunity to retrace Larissa’s footsteps throughout her life to shed some insights into why she was in the predicament where we join her as the reader. The blogs become a story within a story as we also begin following the antics of several extended family members and their own personal trials and tribulations that marry into Larissa’s own personal angst.

The blogs did provide me with a comedic opportunity, using them as a sounding board on some of the quirks of social norms between father and daughter, fallout of not being the most popular girl in school, awkwardness of post-marriage family reunions along with those first days shacking up as a married couple.

To backtrack on the conception of this book, its original concept was far from the finished product we see today. My idea at the time was to do something outside the confines of a contemporary book. I came up with an idea to write an entire book that was based on only a blog for each chapter that carried the flow of Larissa’s story. Over the course of three weeks, while on vacation, I finished a 150-page book with 55 chapters consisting of a blog and nothing else. Feeling like I had just written the next best thing that would hit the marketplace, I forwarded it to my publisher, waiting for the pat on the back and accolades for this cutting-edge idea I had just pulled off. My publisher came back to me stating that the concept was interesting, the ideas of the blogs were entertaining, but man, you’ve gotta write a story around the blogs! Crushed, but with a grin, I went back to conceptualize formulating an actual story around the blogs. As defeated as I felt at the moment, he was the voice of reason and after the pinch of humility, I felt the book came out far more complete. In fact, it earned from the publisher their Editor’s Choice Designation! So I guess that speaks volumes of the book’s quality for the publisher’s prized endorsement.

I assume this book is part of your comedic dating series? Which we hope will continue…?

Of course! These are fun books to create. I have a blast scripting characters, dialogue and story lines that keep the pages turning. I think there are endless scenarios to write about when it comes to love, hurt, relationships and the human hunt for acceptance. For many of us, we nearly develop an obsession to find love and often, after achieving it, we seem to adapt toxic behaviors that send the relationship into fiery destruction. There is humor within that pain.

As your third book in your comedic dating series, how would you say the series has evolved or changed with The Ukrainian In Me?

The Ukrainian In Me complements the dating series in a unique way. When we first met Gus in No Kiss Good-Night, he was a man on the cusp of turning forty and desperate to find love. He was still suffering from his last relationship disaster ten years earlier. His resolve was to focus on a dating website despite the reality that it continued to beat down his self-esteem with every date. In the end, it was pure chance that connected him with Mitch. Yet he allowed the resurgence of his past to nearly destroy what he had with Mitch. Gus eventually discovered his mourning for the past was holding him hostage from moving forward into a healthy relationship.

In Boom Chicka Wah Wah we catch up with Gus seven years later to find he’s settled into a fairly mundane relationship with Mitch. Now he’s being tormented by a male obsession to push his reckless side by performing death-defying stunts while Mitch is pressuring him to progress their relationship to get married and have children. The book showcases a common deal breaker in relationships: opposite goals and opposite views on marriage and having children fuelled by staunch refusal from both sides to settle into a healthy compromise.

With The Ukrainian In Me, we become part of someone at age thirty starting over again in relationships, having to reside back with her parents and told from a female perspective. Not only is Larissa working to find that perfect match, but during the process she is finding herself. During her self-discovery, Larissa comes to realize that her own happiness and contentment isn’t reliant on being in a relationship. For her own journey, it becomes about identifying the inner critic within herself and moving past it.

The first two books in your comedic dating series followed the personal and romantic struggles of Gus Adams. Can we hope to see a follow-up book about Larissa’s next phase of life?

Larissa will return! We’ve just scratched the beginnings with the dynamics of her mom and dad, her new man and the blossoming of her revitalized inner confidence. I’d like to see what Larissa does with her new-found independence. I’m sure her baba will have a thing or two to say about it!

Are you currently working on or planning any other books? If so, can you give us a little teaser as to what we can look forward to?

Absolutely! I do have plans for further books burning at my fingertips! My overall ambition is a third and possibly fourth book to complete the series with the relationship-fumbling Gus Adams in No Kiss Good-Night and Boom Chicka Wah Wah to fulfill his zany journey. I potentially envision one book bringing us back prior to No Kiss Good-Night to the feverish relationship with the gal Peta that eventually ripped out and shredded Gus’s soul and destroyed his confidence in dating women for the next ten years. But I also feel Gus and Mitch need to move things forward in their relationship which means for Gus to step up and lay down his seed and become a big poppa! But of course, Gus being Gus, nothing ever comes easy without a few self-imposed mountains to climb and a tumble back down, bruised and battered.

That being said, I’m currently working on the sequel to my third book, Crazy, Mixed-Up World. This book 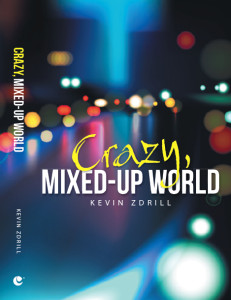 was a shift away from my usual lighter, comedic fare and moved to a darker and complex look within relationships. A common request from readers was asking what happened to many of the characters at the book’s conclusion because it is left purposely open-ended. Life does not have clearly defined destinations. At the book’s conclusion, the lives of the characters in Crazy, Mixed-Up World left us with a snapshot of outcomes from their actions, however, it left readers with the question – what next? The new book will see a few of those main characters return into what is promising to be situations as intense and shocking as the first book. Expect to see dramatic closure to these characters featured in The Jungle Room!